Thriving in a State of Confusion, Part 3

Forming disparate people into a collaborative body is much like building a sand castle on the beach. When the tide comes in, a portion of the castle may be washed away and need to be replaced. A rogue wave could knock down the whole structure and leave only a trace outline of what was once there. Reformation and reconstruction is an ongoing effort, which is why it is called teamwork.

The importance of collaboration cannot be overstated. As Christopher Avery pointed out in his book Teamwork Is an Individual Skill, “Becoming skilled at doing more with others may be the single most important thing you can do to increase your value—regardless of your level of authority.”

Team building under adverse conditions requires the application of a new ideology whereby individuals can get to know and trust one another by working on the same things at the same time for the same reasons.

The challenge in constructing a team is to find a way to pull isolated individuals together around a common task. Fortunately, a practical, easy-to-use process known as responsibility charting is available. The following section details how you can learn to enhance your influence by applying this process within your span of control.

The most effective way to introduce responsibility charting is to pick a situation where confusion prevails. Next, create a matrix with the names of the team members written horizontally across the top and the list of tasks they need to accomplish listed vertically down the left side. Then, visualize a column below each name into which a letter will be placed representing one of the roles described below.[R] Identifies the individual responsible for completing the task. This person needs to accept the stated expectations such as the budget, timelines, production standards, and other factors critical to the successful completion of this task.

[A] Identifies the person whose approval must be obtained before any action is taken. This person will determine in advance how far the [R] can go in completing the task, what progress reports are required, and how often the task team needs to meet.

[C] Identifies those who need to be consulted as the task unfolds. These subject matter experts need to know how much time and talent they are expected to provide. Assigning [C]s makes it clear to the [R] that they will not be working alone.

[I] Identifies those who need to be kept informed and provided status updates as the task progresses. The [I]s are just receiving reports from the [R] and are not expected to provide any substantive input or share any responsibility for the outcome. 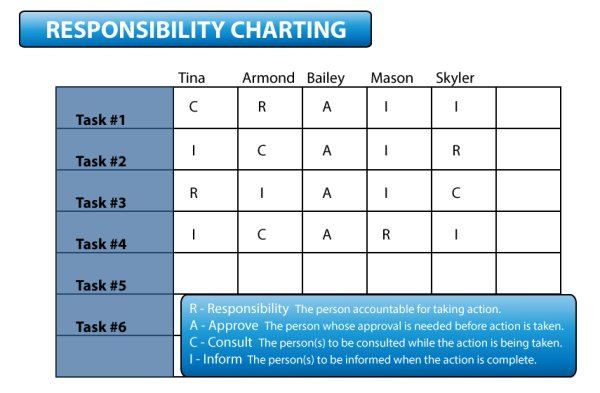 Source: Adapted from Designing Complex Organizations by Jay R. Galbreath.The matrix format outlined above is designed for larger, more complex organizations where the team members may be disbursed and unable to meet. Smaller entities may prefer a less formal version. Instead of letter designations, hats are used to verbally indicate who is performing in what role on any given task. This simpler method can be effective, but it can also lead to confusion if the roles are not clearly understood.

For example, in a team meeting someone may ask, “What would you do?” To some, your reply may sound like a directive so they see you wearing the [A] authority hat. Some see you wearing the [R] responsibility hat because you are known for getting things done. Others see you wearing the [C] consultant hat or the [I] information hat and think you are giving advice or sharing your opinion. To avoid confusion it is important to state what hat you are wearing when you speak and invite others to do the same.

Responsibility charting provides the structure for the creation of a troubleshooting mechanism that scans the environment looking for ways to improve performance and productivity even during a period of upheaval, as was the case in the example below:

The largest medical imaging center in the nation downsized three times during a period of economic upheaval without damaging its world-class reputation for diagnostic excellence. The potential for mass confusion was present throughout this stressful period. A transition monitoring team was formed to ensure that the constantly changing roles, relationships, and responsibilities were clearly communicated to those employees who remained after each layoff. Responsibility charting was diligently applied during all three phases of this painful but unavoidable restructuring.(Note: Later, the CEO lamented that managing the reduction in force was like assembling his four children and announcing that one of them had to find another home. And then repeating the process twice more until only one child remained in the family.)

Performance and productivity enhancement will always be influenced by individual reactions to changing situations and circumstances. In other words, whatever is going on around the team members will be reflected in what each one says and does when they become confused. All the more reason to keep track of the progress the team is making and calling attention to what has been achieved at every meeting.Although the insecure employees may still get confused from time to time, they are now better equipped to work through it. This is good news. It means even the most frustrated employees will appreciate the efforts being made on their behalf and will join in the exploration of causality because it feels natural and nonthreatening.

Once the brainpower of the newly enlightened employees has been engaged, there will be a noticeable change in their willingness to take on new challenges. They will realize that collaboration leads to a satisfying work life. And when faced with a problem in the future, instead of letting it fester or passing it off, they will look for ways to resolve it.