Thriving in a State of Confusion, Part 2

Many of us learned early in life not to admit to being confused, even when it was painfully obvious we did not know how to react. There were times when we understood what was expected, but then things changed and no one thought to tell us—or if they did tell us, it was too late to meet their expectations.

Not only did our self-confidence take a hit, but we also came away feeling belittled, embarrassed, and more confused than before. These negative feelings implanted from previous experiences often return whenever we enter a state of confusion.

Performance management and process improvement are potent feedback tools that expose the sources of confusion. Once these factors are opened for discussion, leaders and followers will better understand how best to clarify their expectations and open the pathway to greater collaboration.

The most effective way to introduce performance management and process improvement is to frame two sets of questions in the form of checklists that follow the natural workflow as depicted in the image below. 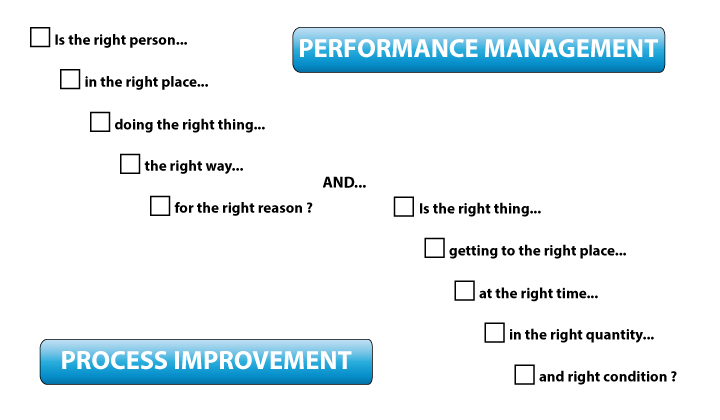 Start with the affected individuals and work your way through the checklists until all parties can confidently and comfortably answer yes to every question. This process will require multiple sessions, so do not hurry to complete the checklists.

Here is an example of how an assembly line supervisor applied performance management and process improvement to address the inadequacies of a new employee.

Shortly after completing the orientation program, Susan was introduced to the other members of her team, who helped her settle in. It was not long, however, before she was making frequent errors and falling behind schedule.

Susan was confused and frustrated, but she kept working as if nothing was wrong. When her supervisor came by to see how she was doing, Susan said everything was fine. The supervisor knew otherwise.

The next morning Susan was summoned to her supervisor’s office. Instead of being upset as Susan had expected, the supervisor calmly presented a flowchart of how the output of Susan’s job affected the work of others in their department.

As she responded to her supervisor’s queries, Susan realized the critical importance of her place in the assembly process and why the company depended upon her to be in the right place at the right time and doing the right thing the right way for the right reason.

Susan’s supervisor explained why she should be thinking about the highest and best use of her talents so as not to miss an opportunity to improve the quality of her work. The supervisor made it clear that whenever Susan found it difficult to keep up, she should not be afraid to say so because there was no shame in not knowing what to do.

Relieved to know she still had a job, Susan promised to try harder. Her supervisor arranged for additional training with the stipulation that Susan would schedule periodic progress reviews. Susan now understood that she was expected to let her co-workers know when she became confused.

The purpose of performance management and process improvement is to provide underperforming employees with an awareness of why getting it right is important, coupled with an understanding of what they need to do differently to improve the outcome. Here are three real life examples:

A remote Midwest subsidiary of a national manufacturer converted $800,000 in weekly defects, rejections, and product waste into an equivalent amount in new sales by forming employee-directed process improvement teams in all departments. Their recommended changes in the engineering, production, quality control and marketing functions resulted in the elimination of the waste and improved the overall quality of the company’s product line. Such profit-enhancing actions raised the value of the company’s stock and attracted additional investors who were greatly impressed by such a rapid turnaround.

When the founder of a renowned counseling center serving more than 4,000 families of Down syndrome and autistic children unexpectedly announced her retirement, grant providers, corporate sponsors, and regulatory agencies voiced their confusion regarding her sudden, unexplained departure. To counteract rumors of layoffs and staff reductions, several long-term employees formed a performance management team. Their purpose was to develop and implement a capacity building plan that reinforced the founder’s vision while the board of directors scrambled to find her replacement. Their collaborative efforts restored confidence in the center’s ability to function effectively without the founder and to provide new educational modalities and service deliver options to more families in the future.

The newly appointed director of a poorly performing Family Support Division serving custodial parents in a large metropolitan region formed cadres of disgruntled and disillusioned employees into performance management and process improvement teams for the purpose of building alliances and forming coalitions that focused on improving productivity and building reliable internal communications links. Within a short time frame their original ranking of 52nd among 53 peer agencies was elevated to the first position. Such an astonishing improvement won national acclaim and system-wide recognition, which resulted in a substantial increase in state and federal funding and the creation of new job openings.