Failure Is the Price Paid for Success: The Risk-feedback Model

When the risk of failure is high, we typically postpone making a decision until there is enough information to ensure a good outcome. On the other hand, if the risk of failure is low, we make the decision quickly, because the consequences of being wrong are minimal. Thus, it is the degree of risk involved in making a decision combined with the availability of useful information that determines our behavior.

The same is true in a corporate culture: The degree of risk, in combination with the amount of feedback, determines how decision-makers and the people who carry out their decisions react to failure. These key factors are represented by the Risk-Feedback Model, which identifies four organizational cultures. In this model, “risk” is the consequences of making a decision, and “feedback” is having access to enough information to make the right decision. 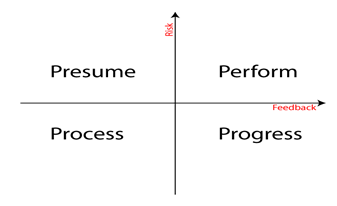 The Meaning of Failure

In a functional workplace, the decision-makers’ challenge is to match the degree of risk with the right amount of feedback, and failure is the price to pay for success. In a dysfunctional workplace, the people tasked with making decisions are often deprived of critical information by people who avoid disclosure for fear of being wrong. The likelihood of failure increases, because the decision-makers are driven to make uninformed choices.

The functionality of an organization is determined by how decision-makers view failure. Overcoming the fear of failure empowers decision-makers to learn from it and gather sufficient feedback to ensure a better outcome in the future.

Of the four corporate cultures, the presume culture is the most prone to dysfunction. Employees are tense, overreactive and crisis-driven. Decision-makers tend to be self-centered, closed-minded and confrontational. Succeeding in this culture is difficult, since both the risks of being wrong and the chance of failure are high. Economic collapse, takeovers and buy-outs are examples of what can happen to an organization that is stuck in a presume culture.

The process culture is also dysfunctional, because its people are nonreactive. It is a slack culture, slow-moving and crisis-resistant. The employees have good intentions but tend to be self-satisfied and status quo-focused. They don’t respond in a timely manner and, therefore, discourage creative solutions to pressing problems. Encouraging people to change, even when doing so is advantageous and justifiable, takes a major effort.

The progress culture is a good place to be. Job satisfaction and high performance are the norm, so there may not be any reason to reshape this culture. However, if you want to move along on an organizational development track, the perform culture is the place to go next. Reaching this culture requires leaders to encourage higher levels of initiative, which means the chance of failure may increase. However, the amount of feedback already available should provide an incentive to take bigger risks with greater certainty of achievable outcomes.

Once the organization has reached a perform culture, the challenge is to stay well ahead of the competition. If the decision-makers are satisfied that where they are is where they need to be, they can use the Risk-Feedback Model as a framework to discuss, discover and determine how to keep the feedback flowing while they contemplate future risks.

The functionality of an organization depends upon how its decision-makers respond to failure. As you review the description of each culture, make note of how that culture might respond to failure, and compare it to what happens in your workplace. Better yet, make copies of this article, and invite your co-workers to join you in a discussion of which culture best describes where your organization is now and where it needs to be in the future. Who knows how such a discussion might trigger a move in the right direction?